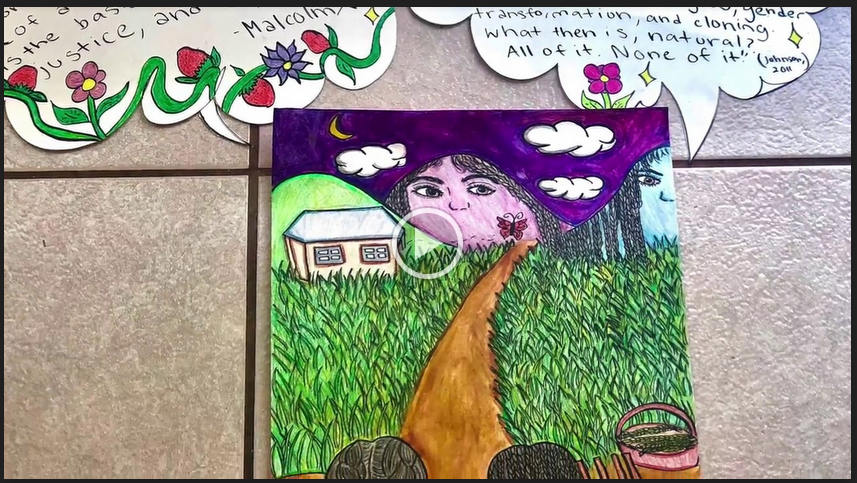 A video that shows a political drawing that represents a manifestation or alternate universe where Queer, Black, Indigenous, and Farmers of Color struggles are completely dismantled. These farmers hold complete access to land title deeds and respect as caretakers of the land, regardless of gender, race, or socioeconomic status, or sexuality.

With full respect to ecofeminist perspectives that bind the idea of a woman with the outskirts of our lands; I explore views that position women in relation to the environment in alternative ways. These perspectives differ from eco feminism, since there seems to be an emphasis on the biological female connection as Earth protectors. As an alternative, I forefront the intersection of transgendered farmers, black farmers and black queer farmers, Indigenous queer farmers, and their experiences. Within and food sovereignty movements. I was interested in viewing this relationship with a focus on preservation of ancestral seeds and practices from these communities, while questioning why it’s so challenging for these farmers to hold land title deeds or garner respect as land protectors.

I use braids as a common thread, as I acknowledge that braids hold a significant and cultural connection with black and native peoples. For example, they are represented in crops like sweet grass, where the crop itself is braided. The Fields of sweet grass represent healing, braided sweet grass in the basket represents peace, purification, and a way to bring humans in connection with the natural world. Braids on the Native and Black farmers and mountains represent their connection to lands, where braids connect each group together showing that each representative is interwoven with each other. Braids are commonly worn in the experience of native and black peoples, and I wanted to explore the idea that we’re all interwoven with each other regardless of gender, sexuality, or background.

There’s a blue and pink mountain to represent transgender visibility, showing a manifestation of the overall respect of queer farmers who identity as black indigenous or as a person of color. I chose to insert a thought bubble, which reads two quotes from Alex Johnson’s article “How to Queer Ecology: One Goose at a Time” which reads, “Observing queer behavior in nonhumans is as easy as a trip to the nearest primate house, or a careful observation of the street cats, or the deer nibbling on your shrubs, or the mites on your skin” (Johnson, 2011). The secondary quote below reads as, “The living world exhibits monogamy. But it also exhibits orgies, gender transformation, and cloning. What then, is, natural? All of it. None of it” (Johnson, 2011). These quotes help explore the idea that our environment, all existing species, and the lands that connect us together show various qualities of gender and queerness.

I chose the Malcolm X quote, “Revolution is based on land. Land is the basis of all independence. Land is the basis of freedom, justice, and equality” because I was considering how it’s extremely difficult for queer black indigenous or womxn of color, to receive formal land ownership to produce and sustain agricultural lands. The Butterfly represents migration and travel, also showing that we’re all related and that migration is natural. The sky is purple to represent the coming of night time, and the moment before the sun completely sets where the mountains show their queerness, almost as if it’s an alternate reality or universe where the patriarchy doesn’t exist.