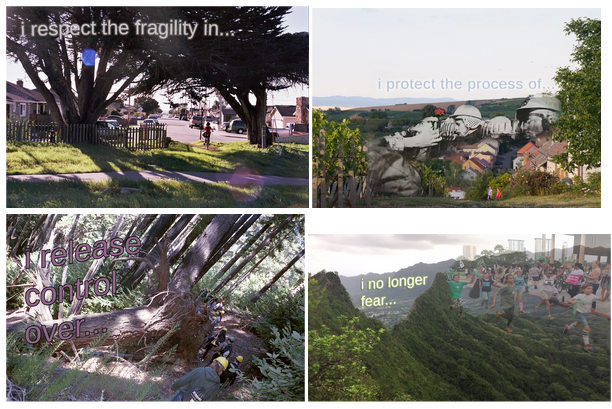 Four images of natural landscapes, each with an open ended mantra to reflect upon and facilitate decolonization of values/beliefs.

My project draws upon the act of decolonizing methodologies and feminist political ecology as it relates to intersectionality. The mantras written over each image are purposefully left to the viewer to complete, since everyone has their own unique response and meaning. From my understanding, a mantra can help in feeling grounded, as well as empowering self sovereignty. All background images were taken by me, while two of the four include overlayed images sourced from the Creative Commons. Prior to shelter in place, I planned to use photos that were representative of multiple perspectives on decolonization and visibility. I decided to use personal imagery, given the self reflective nature of staying at home. In honor of intersectionality, I feel I can only elaborate on my own experiences, and simultaneously hold space for others to do the same- thus the open ended nature of each mantra.

The first pictures a neighborhood filled with trees, houses and cars, and the focal point is a child on their bicycle. The mantra reads, “I respect the fragility in…”, inspired by Sara Ahmed’s Notes from a Feminist Killjoy that explores the power of fragility and its reclamation.

The second image was taken in my hometown in Czech, showing the countryside, vineyards and rows of homes. The mantra reads, “I protect the process of…”. I overlaid another image taken during the Velvet Revolution (1989), courtesy of the Creative Commons. Although I wasn’t alive during this event, it resonates with me and my family history. I would personally finish the phrase: “I protect the process of peacemaking”. The overlaid image shows an extended arm holding a red flower to a row of soldiers; it is placed on top of the background so that the policing bodies line up with the homes. I positioned this intentionally, in reference to biosecurity presented by Rosemary-Claire Collard in Cougar-Human Entanglements and the biopolitical un/making of safe space. My hopes were to highlight assumptions of security, then direct the attention to the processes that are neglected or regenerated as a consequence.

The third image’s mantra reads, “I release control over...”. The background photo is of a naturally uprooted tree, with students walking around the roots wearing yellow hard hats. When creating this image, I considered the patriarchal values embedded in research methods such as objectification with the goal of control. I wanted to represent the possibility of letting go of that goal altogether and recognize that we (humans) are not the only ones “in control”.

The fourth and final image shows one of the peaks at Mt. Olomana on Oahu, with an overlaid image of protesters at an anti-Trump rally in downtown Honolulu (Creative Commons). The mantra reads, “I no longer fear…”. There are certainly grounds for feeling frightened, angry, and anything else when it comes to the current administration- but the photo of that protest carried a different energy that I felt connected with the landscape and people. I think this is my favorite image, because I intended to visually reconcile protestors with the role of protectors.