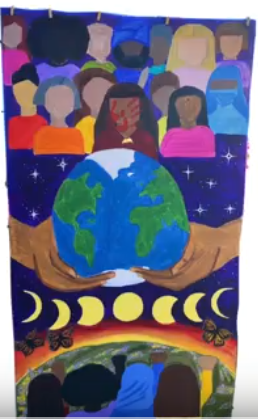 Canvas Painting that highlights intersectionality and women in the environmental movement.

My art assesses Eco Feminism; the domination of women and the degradation of the environment are consequences of patriarchy and capitalism. For this course, our final project was to produce an art piece to reflect our learned knowledge. I would not consider myself the best artist but the meaning behind my artwork is the message I wish to spread to my community. I have based my art off of the Feminist Political Ecology theory. The theory assesses and advocates for a global society in which humans can live in relation to nature while simultaneously deconstructing the framework of colonization. It is a movement that advocates for gendered knowledge, rights, and politics and includes many cultures, not exclusively western knowledge. Looking deeper, the information revealed how intersectionality can take a leading role in how institutions disproportionately affect certain demographics. The feminist political ecology approach expands the borders of feminism and gives women spaces of power. Feminist political ecology emphasizes the idea of having multiple identities, therefore leading to the notion that in certain spaces, individuals are not always marginalized. This provides spaces for power and representation. I wanted my artwork to expand beyond western knowledge to include multi-cultural significance. The meanings of my illustrations are below: