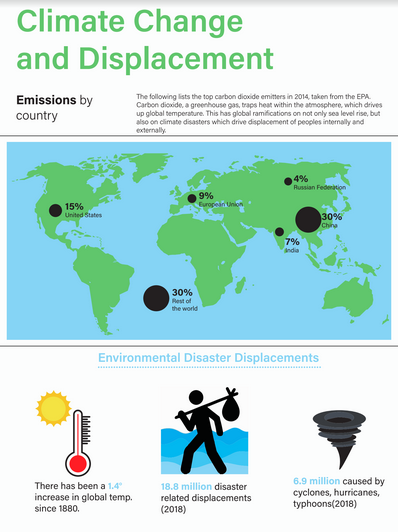 Infographic on carbon emissions by country and climate change displacements.

Refugees face disproportionate climate impacts.This infographic portrays the disproportionate responsibility held for carbon emissions worldwide. A select few nations are responsible for the majority of co2 emissions, yet are doing little to minimize their impact or reduce their emissions further. The main diagram is a map of the world with the top five producers of CO2 by fossil fuel consumption. Over each emitting country is a circle with a size relative to the percentage of the CO2 emitted. China is the largest emitter with 30%, followed by the United States with 15%, the European Union with 9%, India 7%, and the Russian Federation with 4%. There is a lone circle at the bottom of the map representing the rest of the world, which emits 30% of the remaining CO2. Therefore, these 5 countries produce more than half of the world's CO2 from fossil fuel consumption.

Towards the bottom half of the page are a set of 3 modules containing facts about climate change and displacement. The first one has a sun above and to the left of a thermometer stating that “there has been a 1.4° fahrenheit increase in global temp. Since 1880”. This is important as even a slight change in temperature has massive worldwide implications, such as the magnification of climate disasters. The next module is a figure with a bindle, signifying he is displaced, walking with a set of waves behind him, representing the impacts of climate change. The statement below reads “18.8 million disaster related displacements’. The final module to the right of it has a hurricane. Below reads “6.9 million caaused by cyclones hurricanes, typhoons”, natural disasters exacerbated by climate change.

Climate refugees are then mostly a product of a select few nations which are majorly responsible for the conditions in modern times. As Matthew Gibney writes in The Ethics of Refugees, these climate changes are often “exacerbated by industrialised states”. The problem lies in the little responsibility taken by these nations for their contributions to climate change. As major producers of greenhouse gasses and drivers of climate related disasters, they must assist smaller, less powerful nations who face impacts like sea level rise. In the 2011 film The Island President, President of the Maldives Mohammed Nasheed challenges nations to reduce their carbon footprint as the Maldives succumbs to sea level rise.

This demonstrates the violation of the pottery barn rule. Humans have upset the natural order of the Earth and must fix it; you break it you buy it. However, this argument only rests on the surface. Another possible argument is, that as part of a nation contributing some of the most to climate change, we are responsible for driving the disasters which create refugees. We have a duty to raise awareness and help the cause of climate refugees.