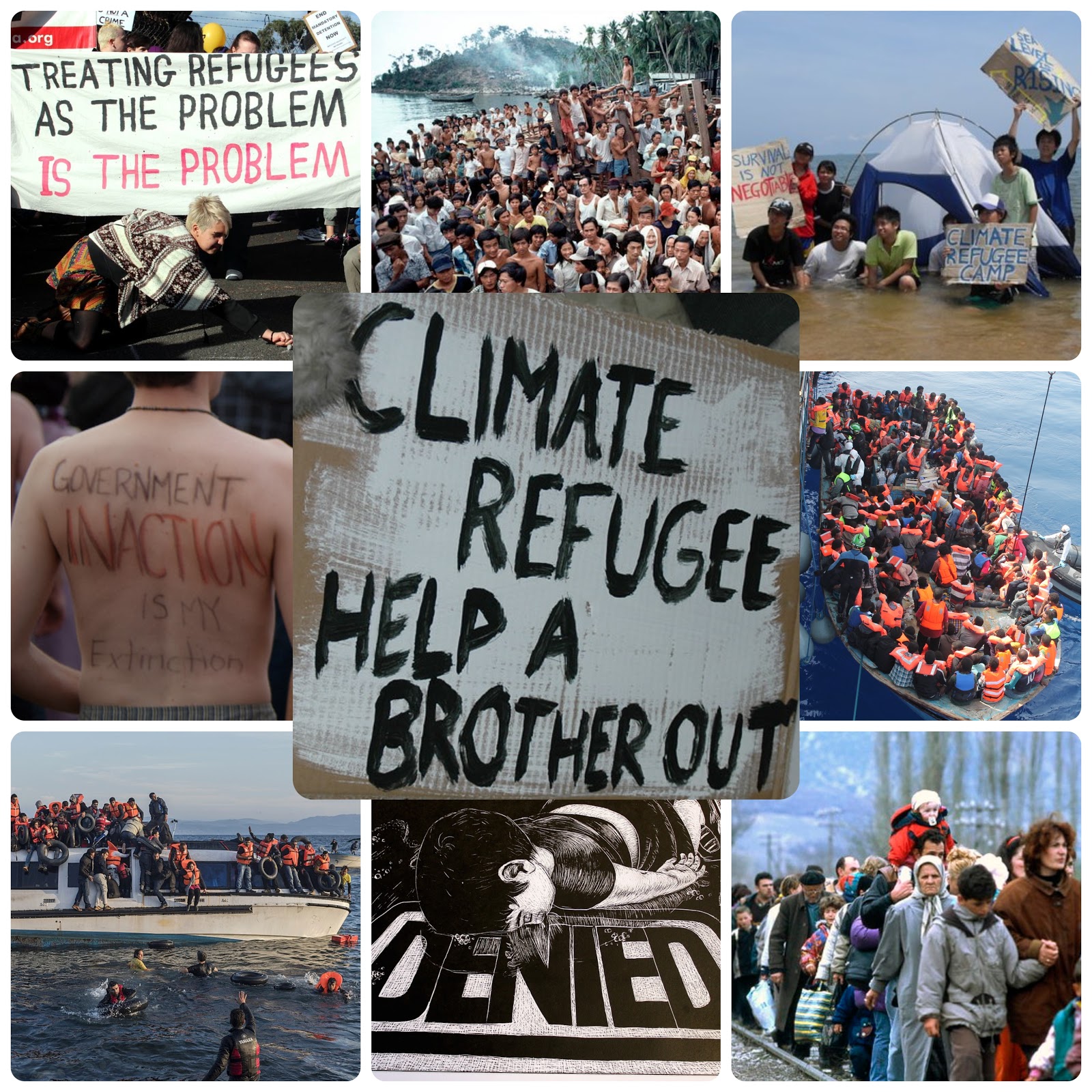 Collage on climate change and its negative impact on various climate refugees.

Climate change has been known to affect millions of individuals around the world, however, refugees have immediately become the most vulnerable to this global issue. Refugees are constantly living out of fear that one day they will become permanently displaced for the rest of their lives due to drastic environmental changes that make it extremely unsuitable to live in. This collage was designed in hopes to properly depict the detrimental effects that climate change has on refugees and demonstrate what their lives look like on a day-to-day basis. The detrimental effects of climate change have caused many people to leave their community, home, and most of their belongings, in order to find a place with better living conditions.

For example, the top right picture in the collage portrays islanders that live on the Tuvalu and Maldives islands emit very little carbon and other greenhouse gases, but have been experiencing a large increase in sea levels. The increase in sea levels is making these islands more dangerous and less inhabitable. These individuals are either forced to adapt to living their lives on water or leave everything they know behind in order to find refuge elsewhere with better living conditions, which was unfortunately stripped away from these innocent and vulnerable individuals. This relates to the middle left picture because it portrays the fundamental inequality that surrounds climate change. The words written on the man's back “Government inaction is my extinction” is meant to represent the biggest polluters that face no consequences or punishments for damaging the world and its climate.

The collage incorporates two images (middle right & bottom left) with boats that are overloaded by refugees trying to seek refuge in other parts of the world. Boats are one of the many ways refugees migrated and they usually consisted of overpopulated groups traveling together. Another reason why we incorporated the use of boats within the collage has to do with the relation of the MS St. Louis. This ocean liner carried over 900+ Jewish refugees from Nazi Germany who were intending to escape anti-semitic persecution. Each refugee aboard carried a great deal of hope with them as they believed refuge awaited them. However, this great deal of hope quickly turned to fear when they were denied permission to land in Cuba. Being denied refugee during a horrific time such as the Holocaust must have been unbearable for most if not all people aboard the MS St. Louis. Yet, this is the reality for most refugees as they can be easily denied access from anyone with the right authority. This is evident with the implications of the MPP (Migrant Protection Protocol). The MPP has only made it extremely difficult for people to gain asylum due to the government asking for more exclusive forms of evidence. Therefore, we included an image (bottom middle) that showed a child lying helplessly on top of the word, denied. With climate change, the ability to deny refugees access to refuge will be more common than ever and since the rate of climate change is quickly increasing, the world can expect to continue witnessing more and more refugees traveling for days on end, hoping for a better life.

We hope that with the image in the middle of our collage that states “Climate Refugee Help a Brother Out” can provide more awareness about this global issue. Overall, we hope this collage can provide some insight on the many negative impacts climate change has had on these already very vulnerable refugees. We also want it to highlight the injustice and inequality that these people experience on a day to day basis, due to others pollution on the climate/Earth.