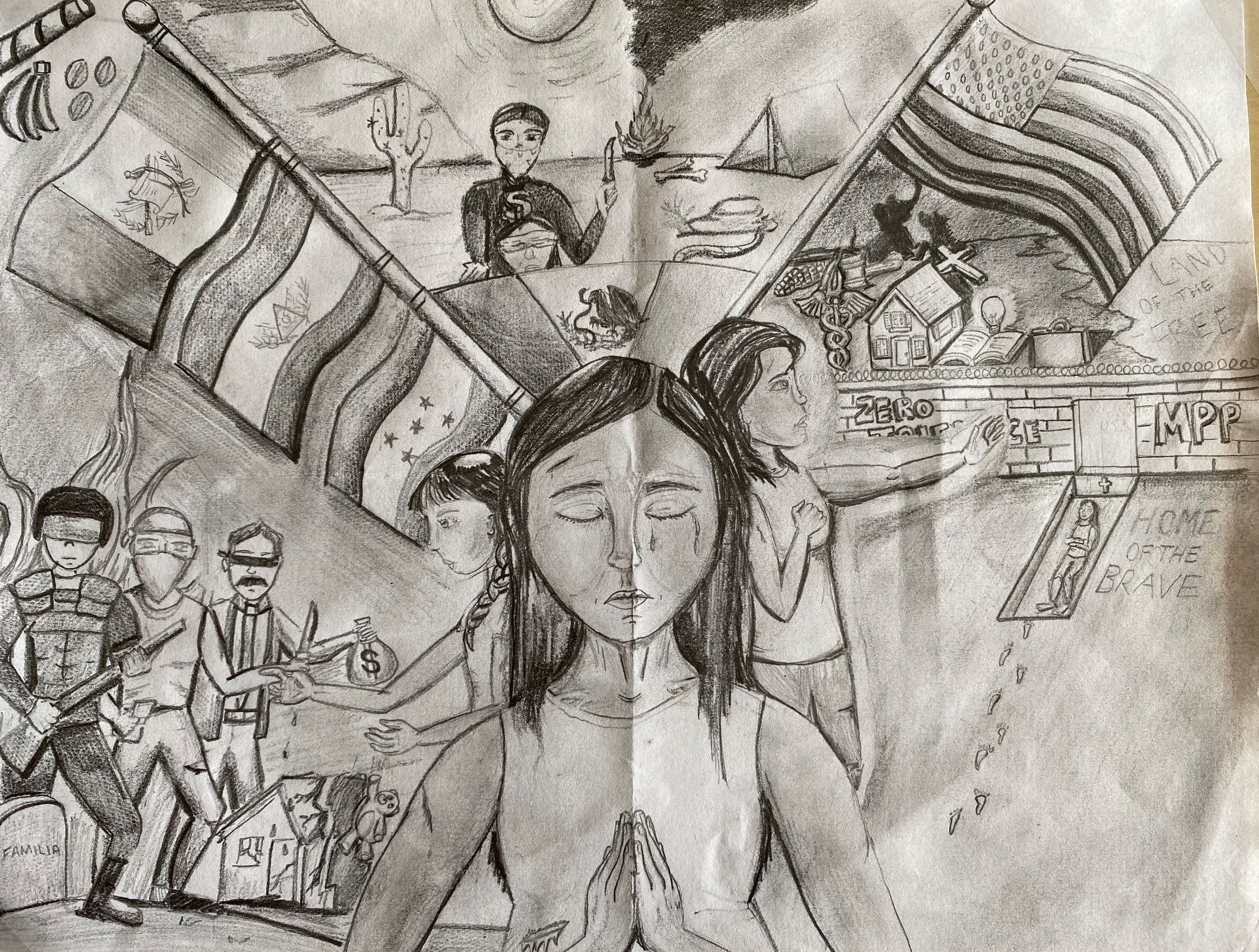 Drawing portraying the transformation of immigrants as they traverse the different terrains and situations to get to the U.S only to be restricted at the South Border.

The alienation of the asylum seekers at the southern border of the United States is an explicit representation of the “State of Exception” proposed and explained by Giorgio Agamben in “Homo Sacer: Sovereign Power and Bare Life”. The State of the Exception is where the government strips a particular group of people from basic rights to separate from the population by portraying them as a threat. The U.S government has constantly portrayed them as such, however it is not the case. I have a drawing that portrays how the experience of fleeing makes asylum seekers grow, not necessarily in a positive light but in a way to survive. It is shaded and drawn entirely in graphite in black and white which is representative of how immigration law and refugee status is not all balck and white. It is way more complex, so we have different shades. It starts with the center of the page, there is a young woman crying and holding her hands as if praying in hope or in fear, surrounded by the experiences she had to go through as an asylum seeker.

Starting from the left of the page to the right of the page, the young woman’s journey surrounds her. On the left of the main woman in the center, is a portrayal of the woman as a young girl dropping a teddy bear while pointing to a soldier, a gang member and a politician as they are overlooked by the flags of the northern triangle (El Salvador, Guatemala and Honduras). At the farthest point to the left of the girl, the soldier is in full dark armor carrying a gun signifying military violence. To the right of the soldier the gang member is wearing torn clothes as if being in fights. He is also wearing both a bandana on his head and around his face only revealing the eyes, as if to hide his identity. In his right hand, which is closest to the soldier, there is a stack of money representing what the gangs commonly ask for. In his left hand there is a knife, representing the threats they give. To the right of the gang member, there is a politician wearing a suit with a blindfold on his eyes and a sack of money in his left hand. The politician represents the blindness of the needs of the people. The left foot of the soldiers and the gang member stomp carelessly on the grave of the family lost. The politician stands behind a broken house signifying a terrorized home. All of the three men are standing in front of a raging fire portraying mass destruction through violence. At the top left corner there is a banana bunch, coffee beans and sugar cane as an ode to the U.S involvement in these countries. This section of the drawing is representative of the girl losing her childhood to the political and social violence ravaging her home country.

Above the central young woman, the flag of Mexico is portrayed above her head as it leads to the background of a desolate desert and camps, as well as the eerie views of bones and the act of someone being kidnapped. The kidnapper is behind a victim placing the dollar sign above them as if placing a price on their life. The mountains and desert represent the harsh terrain they have to cross. The sun at the center top is radiating extreme heat. In the distance is a fire connecting as the fire left behind. At the right above the center woman’s head is a tent with bones laying in front of it representing the deaths of asylum seekers at the camps.

On the top-right of the younger woman’s head, there is a flagpole that waves the United States Flag over the border. Behind her shoulder, there is a portrayal of the young woman as an adult shining as a ghost looking over what she was seeking longingly. Her right arm is at her chest with her hand as a fist showing the strength she once had while her left arm extends towards the border wall towards wheat she was never able to reach. The woman’s physical body lies in an open grave at the entrance of the border to the U.S with the words “Home of the Brave” inscribed on the ground next to her grave. The border wall is engraved with two policies deterring the asylum seekers: Zero Tolerance and MPP. Behind the wall are all the opportunities that the asylum seekers are after in basic symbols on half the land. A house represents a home. A lightbulb represents knowledge. The Caduceus represents medical needs. A briefcase represents jobs. An ear corn represents food. A gavel represents justice. All the way in the back of these options the shadows of an elephant and a donkey fighting symbolizing the fight between both political parties. The opportunities are overshadowed by the United States flag that has teardrops instead of the stars reminding us of the lives lost. The rightmost half of the land has the words “Land of the Free” lightly written on the ground, remembering that the asylum seekers are not free.