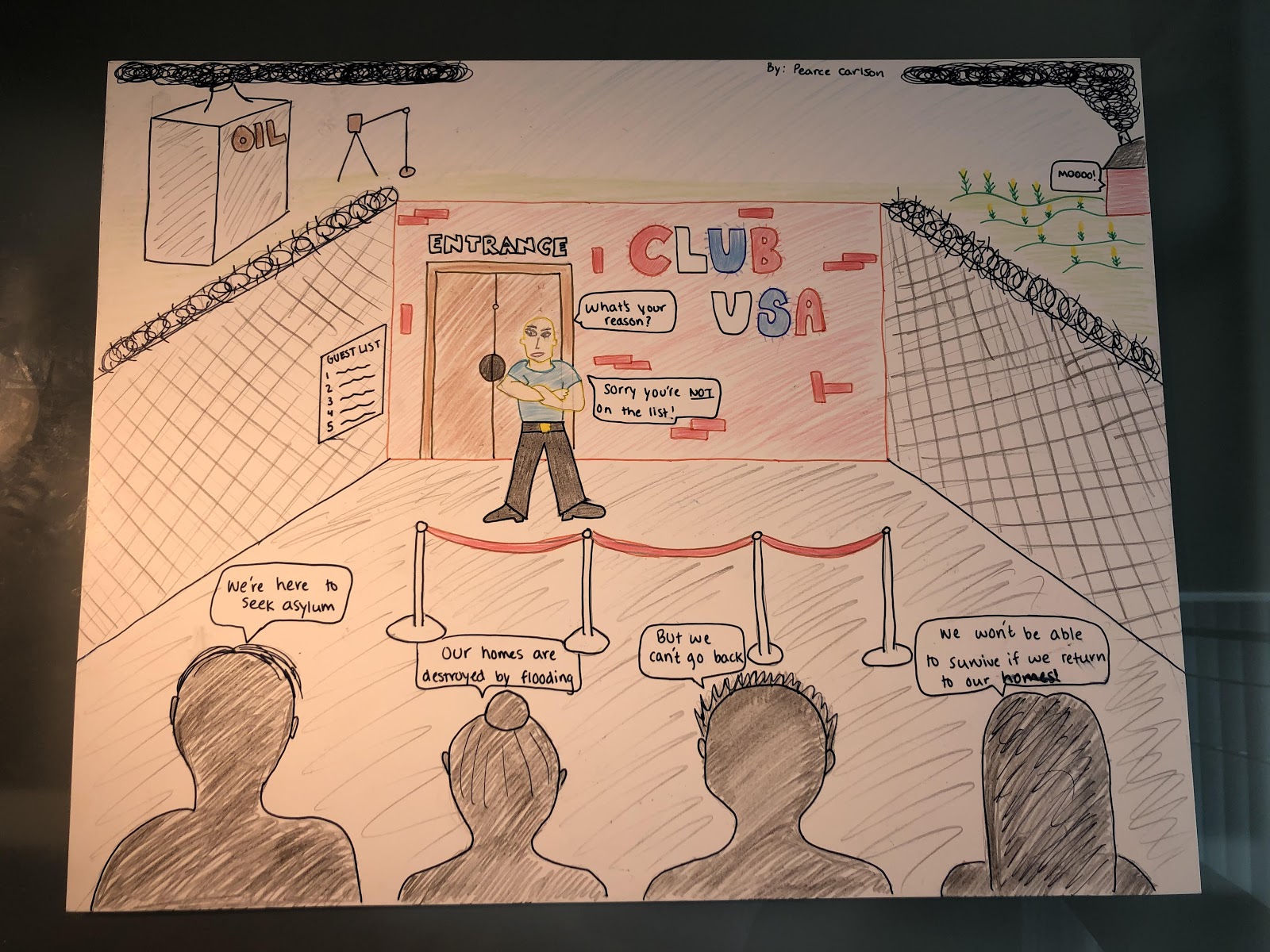 A caricature drawing depicting climate refugees at the U.S. border.

Now more than ever, people are feeling and seeing and the effects of climate change; and for many, these changes are forcing them to leave their homes and seek refuge elsewhere. This caricature is designed to illustrate just that. People living on islands such as the Maldives and Tuvalu, as well as those living near a coast are facing sea-level rise, farmers are experiencing droughts and floods, and both marine and terrestrial (land) habitats are being destroyed all as a result of climate change. All of this mayhem surrounding climate change is often forcing people to leave their homes, livelihoods, families, and their sense of belonging in order to seek refuge, sometimes at the United States border.

That is what is being illustrated on the poster board. Here, the United States is equated to a bustling night club. There are throngs of people lined up waiting to get to the front entrance to see if they can enter “Club USA.” Hanging on the barbed wire fence next to the entrance is essentially a guest list. Here, attendees are required to either prove they know a family member that is a member of Club USA or tell the bouncer one or more of the five reasons they need to enter the club. However, it is up to the bouncer and the owner(s) of the club to decide whether or not an attendee is allowed in. In essence, the guest list represents the 1951 Convention where the official definition of a refugee was drafted. The definition includes five reasons as to why a refugee should be granted asylum to a country in which they are seeking refuge. These five reasons include “...a well-founded fear of being persecuted for reasons of race, religion, nationality, membership of a particular social group, or political opinion” (1951 Convention). It is important to note, however, that the official definition used by many countries has not been updated since its drafting in 1951. Although it is important to note that immigration judges can make a ruling on whether or not to grant a specific asylum seeker refuge for reasons other than those stated in the 1951 definition. Overall, amongst other legitimate reasons in which people may seek refuge, the definition excludes climate as a reason to seek refuge in another country.

Another important feature of the drawing is the sheer number of people who are lined up to enter Club USA all because they cannot return home due to climate change. Matthew J. Gibney is a professor of politics and forced migration at Oxford University (World Politics Review). In 2004, he published The Ethics of Refugees. In the piece, Gibney states “Displacement may be in part the result of climate change that has been created or exacerbated by industrialized states” (Gibney). Here, Gibney explicitly states that people are being forced to leave their homes due to climate changes and that climate change is being made worse by countries with a very industrial-focused economy. Countries such as China, India, The European Union, and the United States, amongst others are responsible for almost half of the world’s carbon emissions and are contributing to a rapid change to global climates.

Towards the background of the drawing, over the fence with barbed wire, shown there are industries that are some of the largest polluters. Industries such as coal mining, oil, manufacturing, and agriculture, to name a few. These industries emit massive amounts of carbon into the atmosphere which also contributes to global warming and ultimately climate change.

As far as addressing the issue of climate change and the effects it’s having on our planet, there are some solutions. A possible solution that could work also ties into a topic talked about in class: the Pottery Barn Rule of “you break it, you buy it.” This idea of taking in and resettling was brought up and debated heavily during the United States-Iraq war in the early 2000s. Some felt that the United States has an obligation to resettle and aid refugees that were displaced during the war. Although the Pottery Barn Rule as it relates to climate is not represented in the caricature, it is a viable solution to climate change and climate-related issues. Those that are most responsible for “breaking” the environment should also be held most responsible for repairing it.