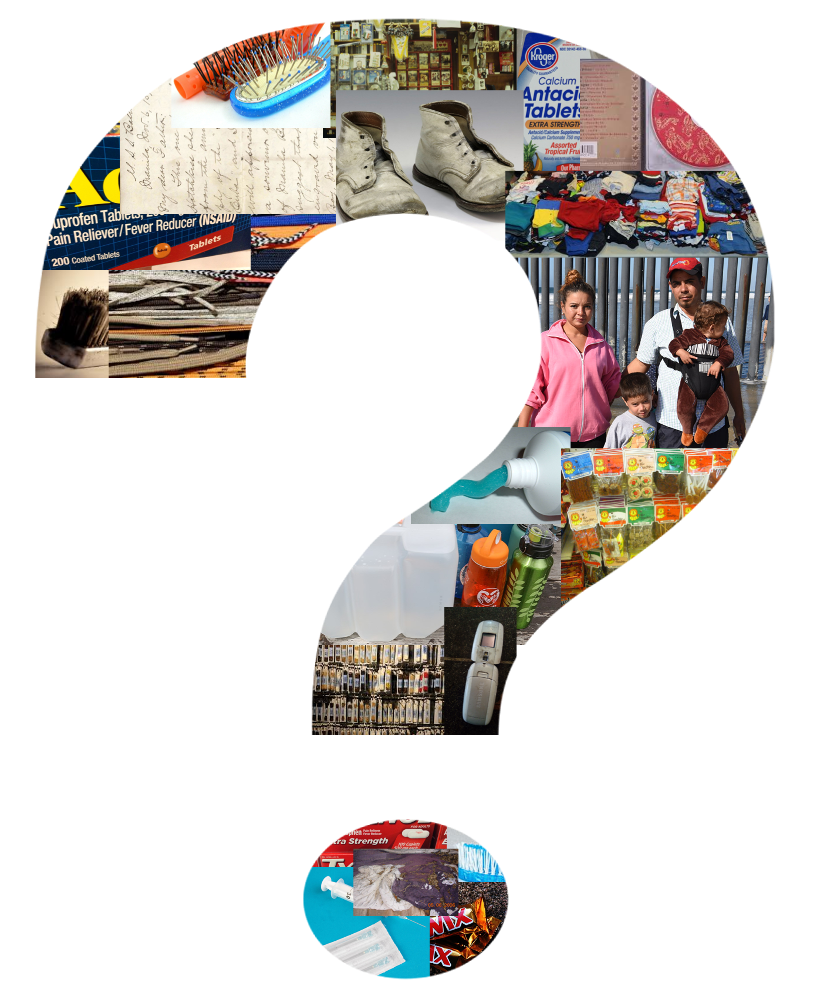 Collage of confiscated items at the border and the creation of bare life.

Asylum-seekers encounter extraordinary circumstances that lead them to abandon their lives and ideas of normal. In the detention process, these asylum-seekers are stripped of ordinary items such as shoelaces, medication, and candy. This collage includes just some of the items that are commonly confiscated from these individuals. The collage is inspired by the work of Tom Kiefer, a janitor who has spent years collecting items that have been confiscated and thrown away by border patrol. While the confiscation of these items may seem trivial, it indicates a much larger, more unethical issue: bare life. This is the idea that an individual is revoked of any type of identity and is just human. These individuals have no protection from a state and are the most vulnerable. The confiscation of these items is just one result of bare life. The United States has created this environment where individuals are abandoned and it raises the question: where do refugees and asylum-seekers really stand in our world?

The collage depicts just a few examples of the types of items that would be confiscated: hairbrushes, pain-relieving medication, shoelaces, letters from loved ones, shoes, compact discs, clothes, toothpaste, candies, water bottles, cell phones, and medical supplies. A family of a mother, father, and two children is also depicted. They are dressed in normal clothing, together, and next to the US-Mexico border. The images are stamped into the shape of a question mark. These are just some of the normalities that are revoked by border control as asylum-seekers attempt to have a better life.

The ability to confiscate these harmless, and often necessary, items is just one event that can occur because of the creation of bare life. In The Land of Open Graves, Jason Deleon describes the horrific situation that asylum-seekers faced in the 1990s when they attempted to cross the border. The border has become a sort of heterotopia, meaning “land that is other.” In this space, there is no one governing authority, so there is no true law that rules the land. For asylum-seekers, this means that they are completely vulnerable to the dangers of the desert and are subject to the condition of bare life. For the United States, this means that they can disavow responsibility for the countless deaths that happen every day. It also allows for border control to treat the asylum-seekers in a way that is inhumane. This can mean anything from taking away a candy bar to allowing people to die and just watch as flies swarm the corpse. Unfortunately, these asylum-seekers have no choice but to endure this mistreatment. With no true identity or protection, they endure the desert, death, and when they arrive, they are humiliated further by having their items and families confiscated. They are essentially told that they have no worth and can, therefore, be treated thusly. Finally, it forces us to think: where are we going to allow refugees and asylum-seekers to stand in this world.

León Jason De. The Land of Open Graves: Living and Dying on the Migrant Trail. University of California Press, 2015.