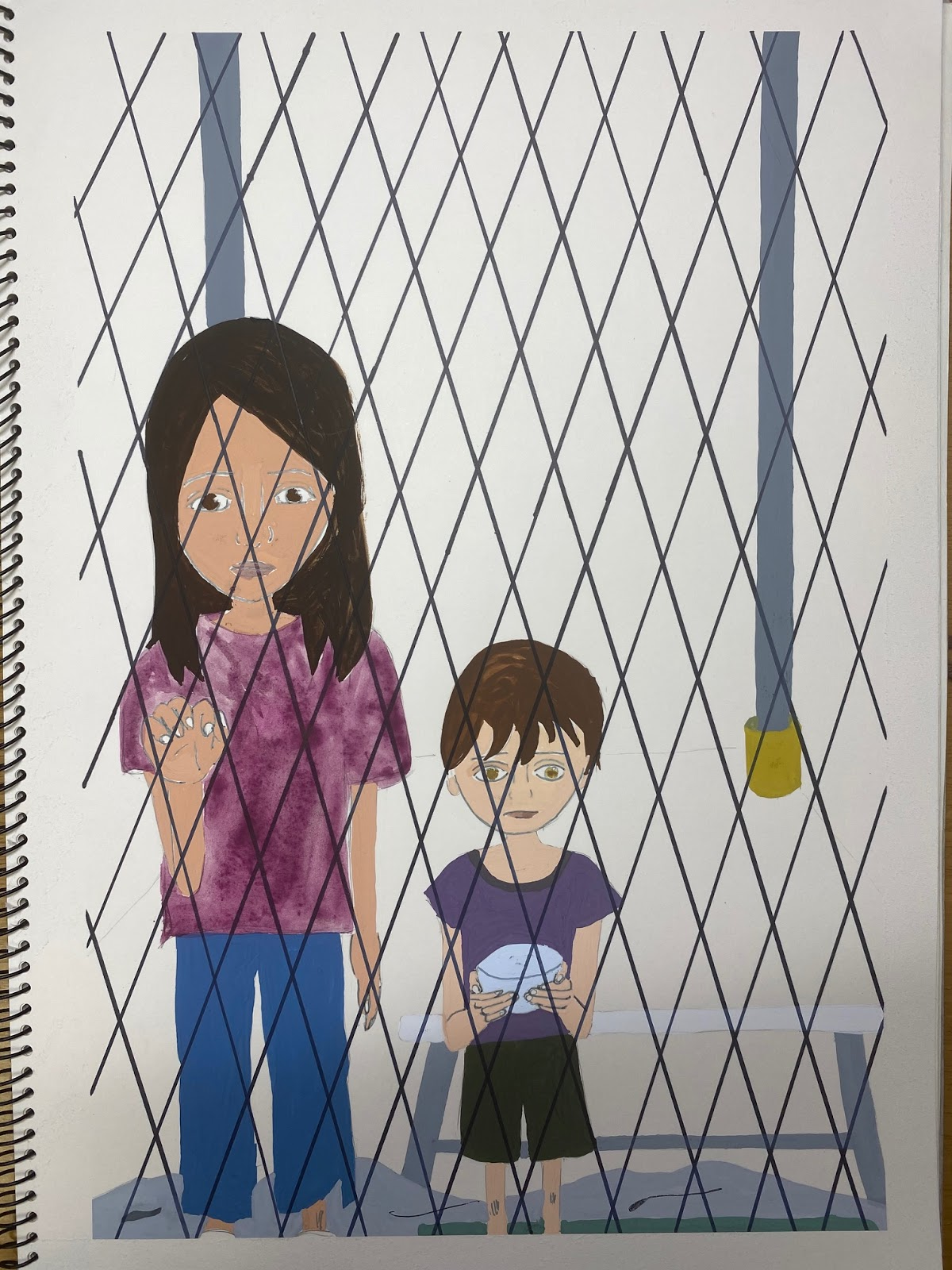 Drawing portraying the difficulties that children are facing due to child detention and MPP program.

Although the asylum system, in theory, grants anyone the legal right to apply for asylum and provide them the basic human right by presenting themselves at a formal port-of-entry, the Migrant Protection Protocols (MPP) obstruct those rights through a process of detention especially for minor migrants that repeats rather than learns from ethical violations of history. This drawing depicts the miserable situation that innocent children currently face in the detention center at the Southern border. It might be surprising how drab inside the fence of this drawing is, but this is mostly everything that detained children can receive at the detention center. It is depicted as you are looking at two children on the other side of the fence. There is a girl on the left side who looks around 10 years old and touching the fence with her right hand. There is a little boy standing on the right side of the girl who looks around 6 years old and holding an empty bowl. Both of them wear dirty clothes, and the boy does not even wear shoes. Their skinny bodies indicate that they are tired and malnourished. There is a bench in the background and thin silver cloth and green battles on the ground which is provided for children to sleep. You see that there is no window in this drawing, and therefore the children cannot see what is going on outside of the detention center.

The empty bowl held by the little boy represents the situation that children receive inadequate food while they are detained. Also, you see children’s dirty clothes that demonstrate an unsanitary environment and the long-term detention inside the facility. Since the situation in the detention center at the Southern border brings life-threatening danger to some derained people, we can say that it is imitating some of the mass detention in world histories such as Native Americans’ prescribed exile by the U.S. government in the early 19th century, Nazi extermination camp in 1933, and Japanese-American internment during World War II. This fact happening today clearly demonstrates that we have not learned the importance of humanization from our history.

This drawing conveys Dr. Bill O. Hing, professor, director of the immigration and deportation defense clinic, and dean’s circle scholar at the University of San Francisco, and his research team’s experience at the detention center at the Southern border. They saw 250 children between the age of 2 years old and 18 years old detained for more than 3 weeks. In addition to that, surprisingly there were no adults who could take care of those young children, and therefore, they had to take care of themselves under such a poor environment. The claim made by Andrea Pitzer, author of the article ‘Some Suburb of Hell’: America’s New Concentration Camp System, is also suggested in this drawing. While she is hoping for the rapid closure of the detention facilities, she poses a question “We can look at young children in custody who have become suicidal. How much more historical awareness do we really need?”

The ethical concern demonstrated in the drawing is that the enforcement of MPP in the asylum process is radically contrary to our morals. We all know that separating children from their family at the border or sending asylum seekers back to Mexico due to the MPP does not protect them, on the contrary, it exposes them in danger. To answer Pitzer’s question, we already have more than enough historical awareness. What we need to do from now is making decisions for asylum seekers deontologically rather than consequentially.