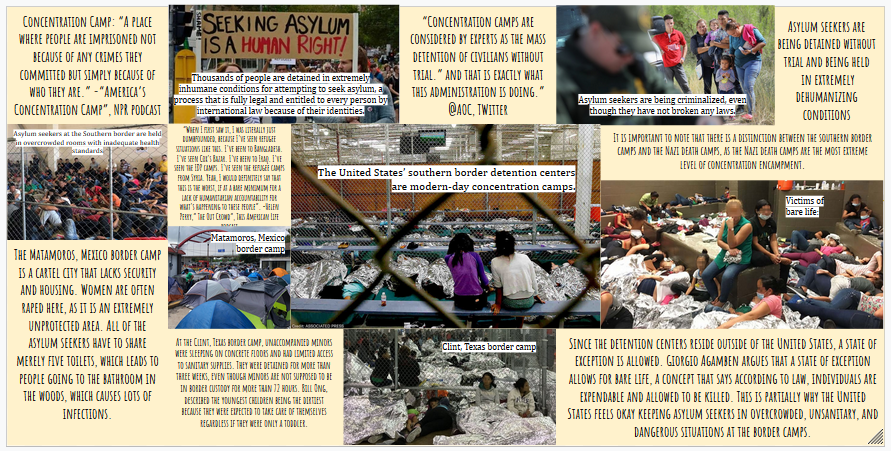 This collage consisting of seven photos and eight sections portrays how the United States’ has enacted bare life on asylum seekers at the southern border detention centers, which are modern-day concentration camps. The center photo is taken through the gaps of a mental fence showing two girls sitting on a bench while dozens of children lay on green foam mattresses on the floor covered by their aluminum-foil blankets. These children have been separated from their families and are being held in a Texas detention center. The caption reads, “The United States’ Southern border detention centers are modern-day concentration camps”.

According to the “America’s Concentration Camp” episode of National Public Radio podcast, “Concentration camp: a place where people are imprisoned not because of any crimes they committed but simply because of who they are”. Thousands of people are detained in extremely inhumane conditions, for attempting to seek asylum, a process that is fully legal and entitled to every person by international law because of their identities. As congresswoman Alexandra Oxasio-Cortez wrote on Twitter, “Concentration camps are considered by experts as the mass detentions of civilians without trial, and that’s exactly what this administration is doing.” Asylum seekers are being criminalized, even though they have not broken any laws. Asylum seekers at the Southern border are being detained without trial and being held in extremely dehumanizing conditions. It’s important to note that there is a distinction between the Southern border camps and the Nazi death camps, as the Nazi death camps are the most extreme level of concentration encampment.

Since the detention centers reside outside of the United States, a state of exception is allowed. Giorgio Agamben argues that a state of exception allows for bare life, a concept that says according to law, individuals are expendable and allowed to be killed. This is partially why the United States feels okay keeping asylum seekers in overcrowded, unsanitary, and dangerous situations at the border camp. Asylum seekers at the US-Mexico border are thus victims of bare life.

At the Clint, Texas border camp, unaccompanied minors were sleeping on concrete floors and had limited access to sanitary supplies. They were detained for more than three weeks, even though minors are not supposed to be in border custody for more than 72 hours. Bill Ong Hing described the youngest children being the dirtiest because they were expected to take care of themselves regardless if they were only a toddler. Similarly, the Matamoros, Mexico border camp is a cartel city that lacks security and housing. Women are often raped here, as it is an extremely unprotected area. All of the asylum seekers have to share merely five toilets, which leads to people going to the bathroom in the woods, which causes lots of infections. As Helen Perry stated in the “The Out Crowd” episode of This American Life Podcast, “When I first saw it, I was literally just dumbfounded, because I’ve seen refugee situations like this. I’ve been to Bangladesh. I’ve seen Cox’s Bazar. I’ve been to Iraq. I’ve seen the IDP camps. I’ve seen the refugee camps from Syria. Yeah, I would definitely say that this is the worst, if at bare minimum for a lack of humanitarian accountability for what’s happening to these people”. Asylum seekers at the Southern border are held in overcrowded rooms with inadequate health standards