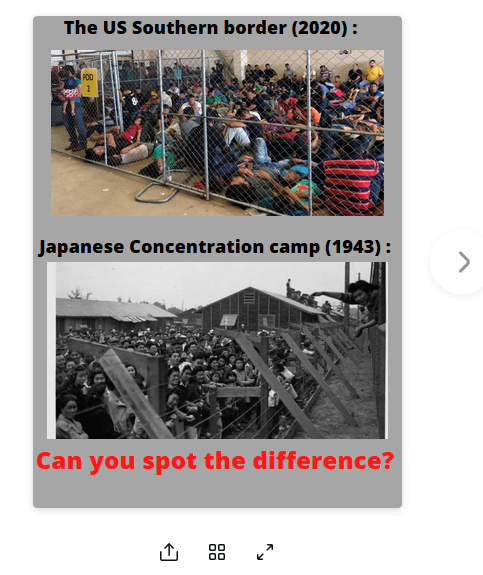 Posters of the southern border and passages of international laws that the US is breaking by allowing this to exist.

The issue analyzed in these images is the concentration camps found at the Southern border and how they violate the human rights of these migrants. My poster begins by showing how similar the US southern border detention centers are to concentration camps. This issue is important because these immigrants are held in inhumane conditions and some migrant children are even “lost by ICE. '' My poster uses quotes and pictures from the detention centers, to exemplify just how horribly they're being treated. The problem that causes this are laws such as MPP, which are highlighted in my poster because they force refugees to prove their “well founded fear” in two countries. I argue that these concentration camps at the border need to be closed and more refugees should be allowed to enter the United States. The reason for this is because many of these refugees are often trying to enter the United States to flee from damage caused by US intervention in their countries. Due to this US intervention it is our duty as a country to take responsibility for the people that we have played a role in displacing. Another reason for my argument is that the United states is breaking international law by allowing these internment camps to exist, and not allowing these refugees to have their rights as listed by the UN Refugee Convention. My poster shows the article and laws that are being violated Some key laws that are broken at these unjust border detentions is the Non-Refoulement law, in which the principle says ‘No contracting state shall expel or return a refugee in any manner to a frontier in which their lives or freedoms are threatened'' 1951 Refugee Convention. Despite the existence of this law, the United States is not only expelling refugees but is holding them in internment camps.

Another example of the lack of acceptance of refugees into the United States is shown in the The Migrant Protection Protocols (MPP) , which is also known as the Remain in Mexico policy.This policy places the burden on migrants to prove a well founded fear in not only the home country their fleeing, but also Mexico. An example of this is shown in the story we analyzed in class about the mother who had to keep proving that she was unsafe to return to her country, even after the murder of her son. In this project I portray the internment camps, the limitations of the 1951 convention, and the treatment of refugees in the US to exemplify that their human rights are not being upheld.

United Nations. “Convention and Protocol Relating to the Status of Refugees.” UNHCR.