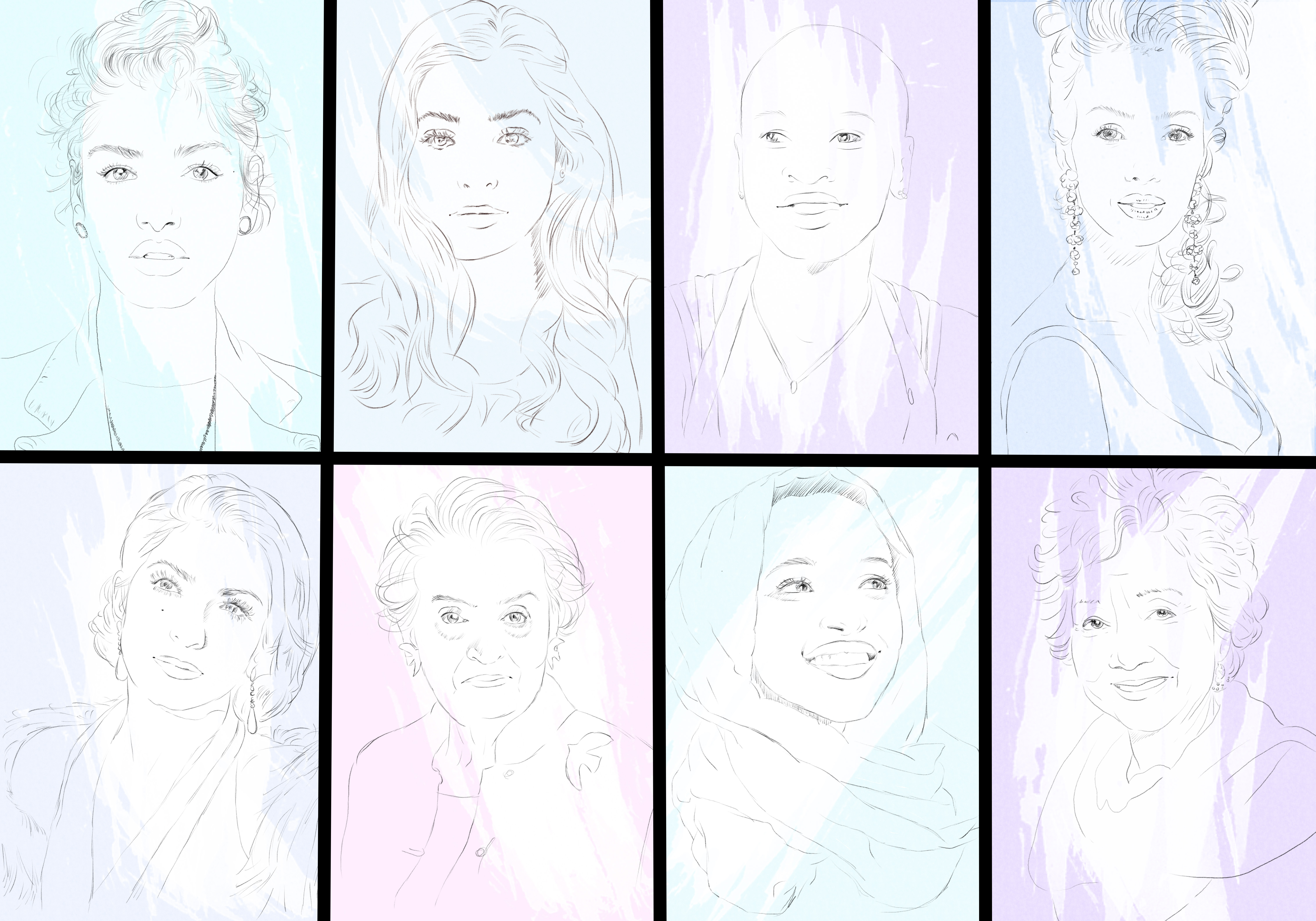 A set of 8 portraits of refugee women who have made prominent names for themselves and advocated for immigration reform. The portraits are to humanize refugees and put faces to the stats as well as emphasize the pride and power of women.

People hear the statistics of refugees and the numbers become so large and abstract that it is difficult to wrap our heads around. There are wars all over the world and hundreds of thousands of people fleeing to different places, and so most of the time it feels like the situations are alien and completely out of our control. The hope for this piece was to put some faces, some individual stories, to the statistics so as to humanize the numbers and news headlines. In this piece I chose 8 refugees who not only successfully fled their home countries, but also grew to make names for themselves and advocate for significant political and cultural change. On top of that, I chose 8 women, because women face even more challenges in the fight for survival and recognition, therefore I wanted to emphasize the pride and power of these women while simultaneously helping people realize that refugees are no different from the rest of us, and in fact, refugees are critical contributors to our society and should therefore be protected.

This art piece depicts simple, pencil sketch type portraits of 8 women in a 4x2 layout. The portraits are separated by thick, black lines. Each portrait is overlaid with a cool color of low opacity. Into the color, and over the women’s faces, are unique brush strokes of white, breaking up the otherwise solid color background. This look serves as a metaphor for the fact that these women make their voices heard and refuse to be erased.

The portraits are as follows (from left to right): Mathangi Arulpragasam, stage name M.I.A., is a musician and activist based in London. When she was 11, she fled to London from the Sri Lankan Civil Law with her parents. Now for over 20 years she as advocated for political and cultural change through her hip-hop styled music. Yusra Mardini is a 22 year old Olympic swimmer who competed under the refugee flag during the 2012 games. She fled the Syrian Civil War in 2015 at age 18. During her escape from her home country, the smuggler boat she was aboard sunk, forcing her to tread water for over 3 hours until she was rescued. In 2018 she released an autobiography titled “Butterfly.” Alek Wek is from the Dinka ethnic group in South Sudan who suffered greatly during the civil war. In 1991, Wek fled to Britain, where she began her career as a fashion model and designer. Wek became a strong advocate for not only refugees, but also for black representation in the fashion industry. Iman (born Zara Mohamed Abdulmajid) is a Somalian refugee who also became a significant women of color in modeling and acting. Iman was a trailblazer in the fashion model industry ever since the 70’s as well as being a celebrity philanthropist and activist. Gloria Estefan (born Gloria María Milagrosa Fajardo García) is a Grammy winning musician and a receiver of the Presidential Medal of Freedom for her music. Estefan fled to Florida from Cuba with her family in 1959 as a result of the Cuban revolution. Estefan has become a national treasure and has received an abundance of awards due to her music and activism for the rights of Hispanic individuals. Madeleine Albright (born Marie Jana Korbelová) fled her home country Czechoslovakia due to Nazi Germany and the immediate threat her family was under being the daughter of an ambassador. Albright became a leader, politician and diplomat in America as she became the first female Secretary of State in US history. Ilhan Omar is another significant figure in current US politics. Omar fled her home country Somali to escape the civil war and spent four years in a refugee camp before coming to America. She is currently serving as a Minnesota House Representative She is the first Somali-American, first naturalized citizen from Africa, and first non-white woman from Minnesota to be elected to Congress. She is also one of the first two Muslim women to serve in office. Adrienne Clarkson (born Adrienne Louise Poy) is a journalist and stateswoman who served as Governor General of Canada. In 1942, Clarkson and her family fled their home in Hong Kong from Japanese occupation. Clarkson was the first visible minority to be appointed governor general, and the second woman, and the first Chinese Canadian.

This is again to reiterate the important impacts that refugees can have on society if given the chance. I think a critical factor in this is the US Refugee Resettlement Program. This program works to integrate refugees into US society and provide them with the resources they might need as well as a sense of community. Programs like this should become a priority in US immigration policy, instead of locking away asylum seekers, we should seek to integrate them into society so that they can become outstanding citizens who benefit the nation for the better, just as these 8 women did.

Many argue the “lifeboat ethics” ideology in opposition to integration programs, stating that why should resources be given to outsiders when the country’s resources are not properly shared between its own citizens. Unfortunately, an uneven distribution of resources is an inevitable side effect of capitalism, that being said, what many people forget is that the vast majority of refugees had sound lives and careers before being forced to flee. Many are well educated and are now unable to pursue their careers not because of lack of skill, but because they have been deprived of rights. These programs can help get refugees who just want to pick up their lives the proper resources they need to help contribute to society.