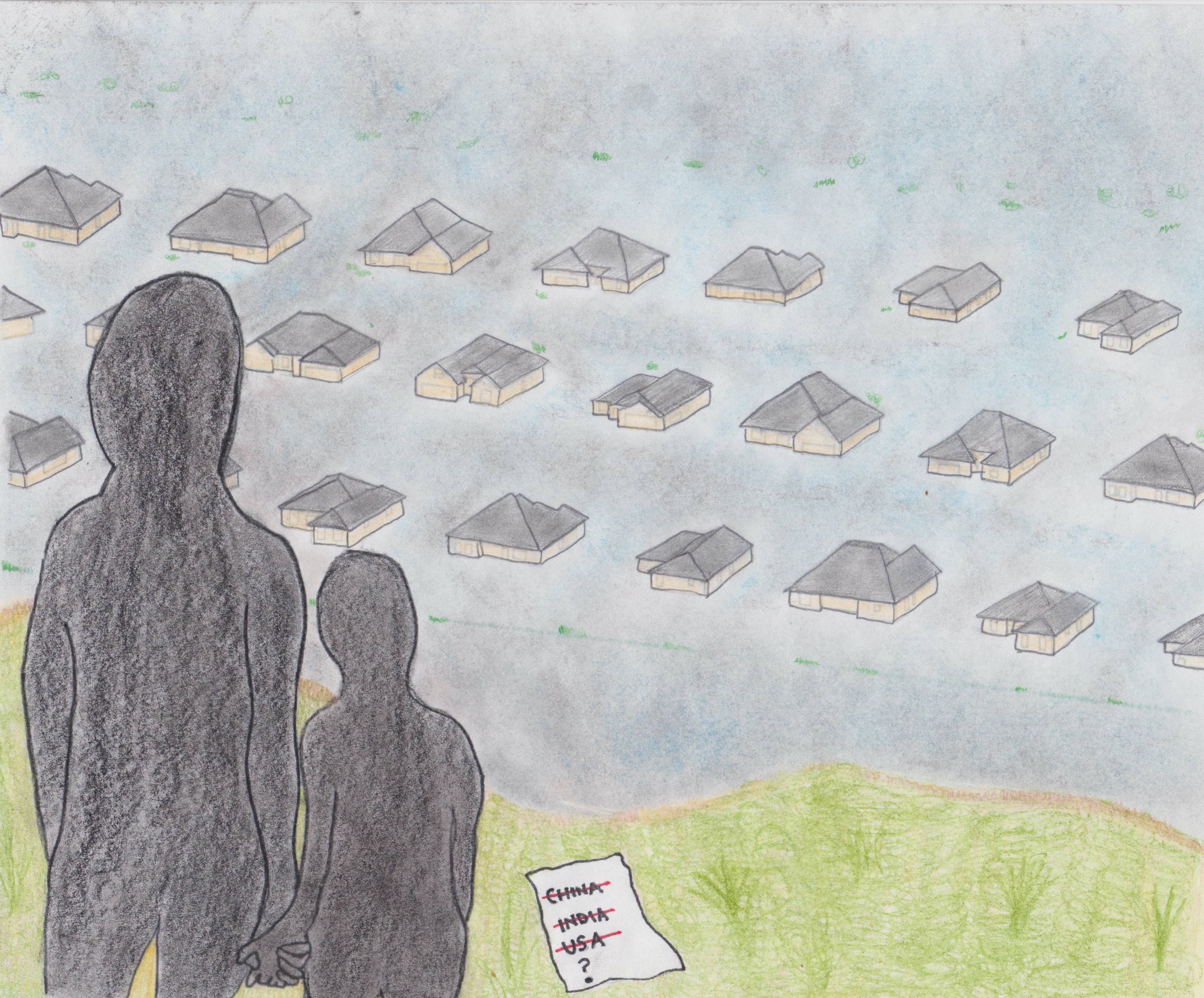 Drawing portraying climate refugees who have been displaced and the effect of climate change on the places in which they live.

Climate change is a serious threat facing the world. This drawing is a depiction of the detrimental effects that climate change will have - and has already begun to have - on the world as we know it. The drawing depicts a parent and child looking back at their community which has been flooded because of climate change. The family depicted has been forced out of their home, and is wondering where they will go. Though the drawing is not specific as to where the family is from, it represents those who live in nations such as Bangladesh, Tuvalu, and the Maldives that are disproportionately affected by climate change, even though much larger nations like the United States, China, and India hold much more responsibility for producing the greenhouse gases and carbon emissions that are causing climate change to occur.

In the foreground of the drawing, blacked-out silhouettes of the parent and child are standing on a hill, facing away from the viewer. They are looking down at their community that has been flooded due to a climate change related weather event. On the hill next to them, there lies a piece of paper. The paper lists China, India, USA, and a question mark. The three named countries are crossed out in red. The background features three rows of homes in a community that have been flooded. The choice to make the people in this drawing silhouettes is due to the fact that this family affected by climate change could represent any family. The paper on the ground represents the possible countries to which these people may go. As stated in Rising Tides: Climate Refugees in the Twenty-First Century by John Wennersten and Denise Robbins, the three listed countries produce a large majority of the world’s carbon emissions, but are not feeling the effects. Because the UNHCR refugee definition from the 1951 Convention does not include those affected by environmental disasters or climate change, the likelihood that this family will be able to resettle in one of these large, wealthy countries is nearly nonexistent. The flooded community represents the communities of nations - specifically small island nations and communities in coastal areas - that will be flooded if the climate threat is not mitigated.

If, as predicted, the world experiences a climate departure in which, as Wennersten and Robbins write, “the earth’s climate begins to cease resembling what has come before and moves into a new state,” millions of homes and livelihoods will be destroyed. The ethical concern portrayed in this piece is where will the millions of people throughout the world who will be displaced from their homelands because of climate change go? An argument that could be made to help mitigate the threat before this happens is a utilitarian one. In other words, the ethical argument that could be made supports the best outcome for all involved. This argument is that if nations like the United States, China, India, and other major contributors to the world’s carbon emissions found cleaner energy and production solutions to curb their emissions, millions of people’s lives and homes could be saved. The concern of where they will go will disappear, as they will not be displaced. If large polluter nations make this sacrifice, it will end up with the best outcome for all parties.