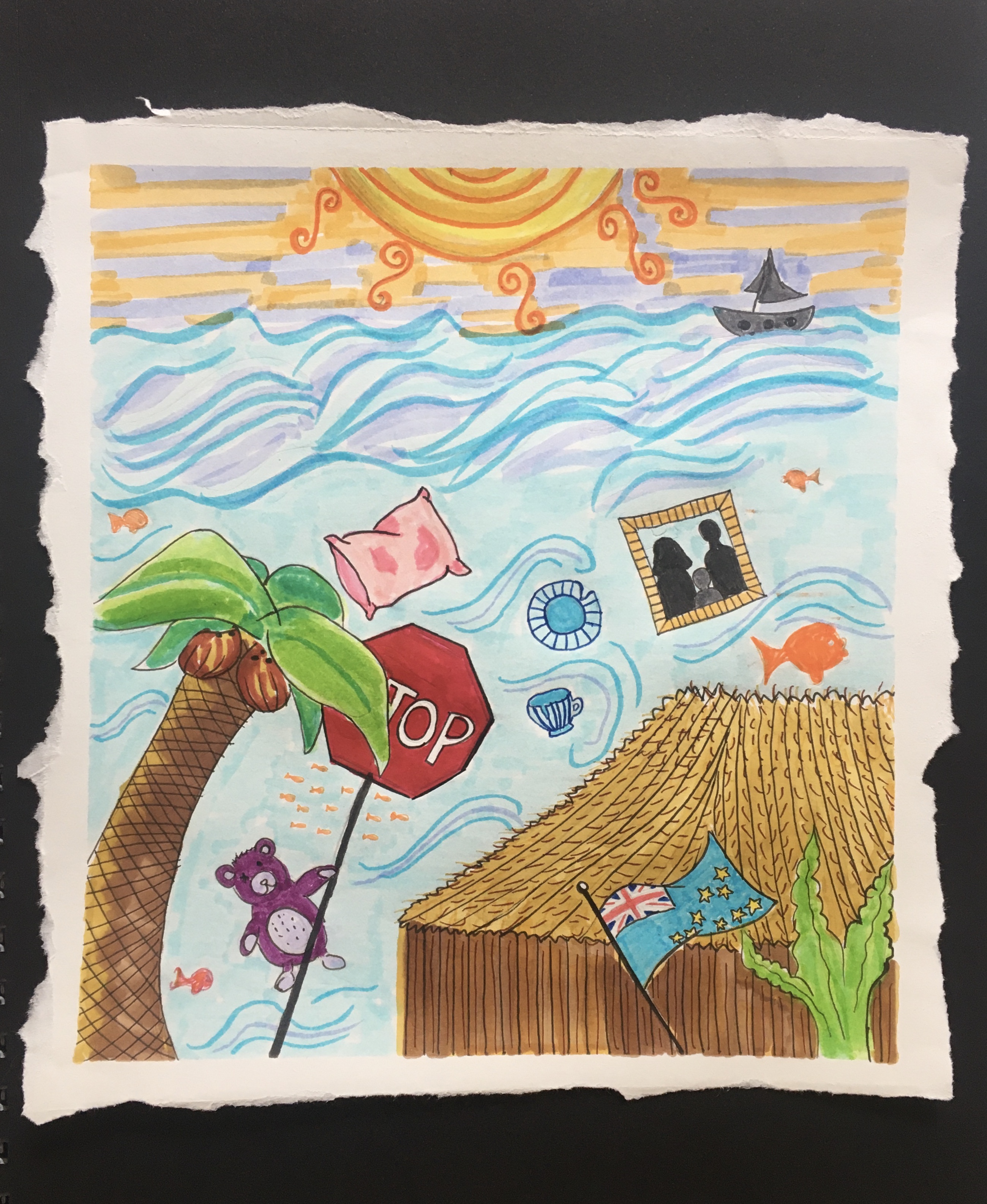 Painting representing the effects of climate change on islands like Tuvalu that will eventually be fully submerged.

This drawing represents what is lost to the rising sea levels, specifically regarding the island of Tuvalu. According to the film “Climate Refugees”, Tuvalu is the first island estimated to be fully submerged due to climate change, along with 40-50 other islands that will have similar outcomes. Already, these islands face environmental and economic hardships. Many are smaller communities that rely on natural resources for survival, so the damage caused by typhoons, hurricanes, and flooding have grave impacts. As John Wennersten and Denise Robbins write in Rising Tides: Climate Refugees in the Twenty-First Century, “it is the impoverished who often bear the brunt of the most environmental damage” (p. 9). If their land is destroyed, so are their resources, homes, jobs, everything.

Under the current 1951 UN refugee definition, those fleeing their homeland due to environmental factors are not considered refugees. This means that even though their country could be totally destroyed, they are not granted protection or rights to obtain asylum seeking status—even though their only option is to leave or be submerged with the island. This strict definition is what inspired my drawing, as I wanted to depict some of what is lost as a result of the rising tides.

My drawing is a mostly underwater scene with various objects submerged alongside the seaweed and fish.

A palm tree with coconuts represents the nature that is lost and destroyed due to climate change. Islands like Tuvalu are heavily dependent on natural resources such as vegetation for survival, so the loss of these is extremely impactful.

Clinging to a stop sign is a teddy bear, representing the children who are affected by the damage. Childhood should be a time where children can safely and securely explore their environment, but in the case of climate refugees, this common norm is unknown to many children who have been displaced. Their childhood can quickly turn into a traumatizing experience of survival that shows no resemblance to the secure and playful time period most of us were lucky enough to have.

The stop sign shows that, even the most desperate efforts made by the people in Tuvalu at climate conventions and rallies go unheard. Without properly enforcing or regulating the ever-increasing human consumption, there is no chance of taming the tides.

The pillow represents comfort that has been taken away from climate refugees. They do not have the comfort of any protection or law to find asylum in another country because they do not fit into the UN definition.

The cup and saucer represent food scarcity. Once these islands are destroyed, the food resources dwindle as many of the islands rely on their natural resources for survival. However, it is not just these islands that will be affected by food shortages—as our population rapidly increases, food production does not. As stated by Wennersten and Robbins, “climate departure will take place in a world of limited food” (p. 11).

A picture frame with a shadowed family represents the individuals and their stories that are shadowed from these problems. When we see statistics in the media, we typically do not see people. We are overwhelmed by the numbers, the percentages, the fear-saturated information, and so it becomes unbearable to imagine ourselves, our own families in a situation as horrific as the reality for many of these migrants. They become a faceless number, which is just as damaging and impactful as the physical harm they experience because it means they are less able to seek protection they need. Perhaps the more obvious drawings underwater are the Tuvalu flag, which was my way of symbolizing the importance of focusing our attention on this island as it is predicted to be the first to go under. The thatched-roof home is an obvious depiction of the fact that due to environmental damage; the people are forced to leave as they no longer have a safe home to come back to.

Above water, I drew a small boat and a small fraction of the sun shining down. These were my small, but apparent signs of hope that there could be a change. While climate refugees can get on a boat and try to shelter elsewhere, this does not always mean it is successful. Entering a country, obtaining asylum status or a visa, finding a job, finding a home—these are all extremely difficult, especially when one’s entire life has just been upended. However, the more aware we all are of these problems and the lack of protection, the more hope we can have for a change. The sun represents a small, but apparent beacon of hope that maybe if we can unify, create impactful policy change, and limit our own environmental footprint, the tides won’t take total control.