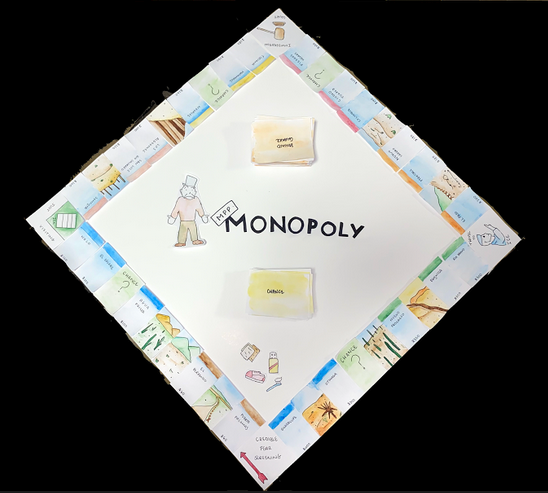 Board game exhibiting the hardships of the MPP process in a Monopoly-esque style.

The process of immigration, particularly across the US’ southern border is a system of institutional violence, that does not prioritize the health and safety of migrants. The harms of this system can be seen through MPP, which is argued against by Doug Stevens and Dr. Bill Hing. In addition, the actual desert terrain of the US-Mexico border threatens migrants through prevention through deterrence. Lise and I created a Monopoly-inspired board game that exemplifies the obstacles one must overcome to achieve immigration status. The game can be physically played, made of watercolor tiles, chance cards, “Go,” “Jail,” and other Monopoly hallmarks customized to realistically exhibit the MPP process. We’d like to disclaim that our intention is not to trivialize refugee life, instead we want to use a widely popular game such as Monopoly to exemplify the frustrations of the MPP process.

Players will start with $1500 of “Resources,” distributed in traditional Monopoly fashion (two $500, four $100, etc). All four game pieces represent items taken away from Refugees on their journey; shoes, papers, medications, and hygiene products. Each side of the square board represents the most used US-Mexico border crossing points; San Ysidro (CA), El Paso (TX), Otay Mesa (CA), and Laredo (TX). Each side is made up of 9 tiles (not including corners), 2-3 of which will contain a picture of the landscape asylum-seekers cross to get to, and at, that respective border, the others being city names or towns at that border. Each side will also contain a “Chance” tile where the player will choose a card representing the obstacles asylum-seekers face while travelling, such as running out of water, Coyote fees, being kidnapped, etc. All Chance cards contain facts from the mentioned borders to further explain the reality of said obstacles. 2% of Chance cards are “Instant Winners,” granting asylum, to represent the 2% of refugees granted asylum each year. The only other positive Chance card is “Immigration Clinic” (similar to a Get Out of Jail Free card: access to a free immigration lawyer when at Immigration Courts).

The corners include “Travel to ICE Detention,” “ICE Detention,” “Credible Fear Screening,” and “Immigration Court.” Like in Monopoly, when a player lands on a corner they must obey the rules of that tile. “Travel to ICE Detention” activates when a player lands on that tile and will transfer the player to “ICE Detention,” where they must wait a maximum of three turns before they can attempt to roll two dice of the same number. They will be allowed one roll per turn until they get two-of-a-kind, enabling them to continue the game at their next turn. “Credible Fear Screening” is a hard reset, meaning the player must start from the beginning of the game with completely depleted Resources. After landing in or on the “Credible Fear Screening” corner that player must now draw from the second set of Chance cards (“Second Chance”) when landing on Chance tiles. This represents the problems faced when leaving detention centers, such as lawyer fees, being detained at Border Control longer than the mandated 48 hours, lack of food options/hygiene, and additional kidnappings. The last corner, “Immigration Court,” is a chance for the player to gain asylum, which can only be achieved if the player can pay the $1000 fee or has a “Immigration Clinic” Second Chance card as well as $300.

This game was purposely made to be close to impossible to win because MPP has made it extremely difficult for immigrants to gain asylum. Our intention is to literally walk the players through the hardships of a migrant’s journey with the hope of the player realizing the illegal aspects of MPP.