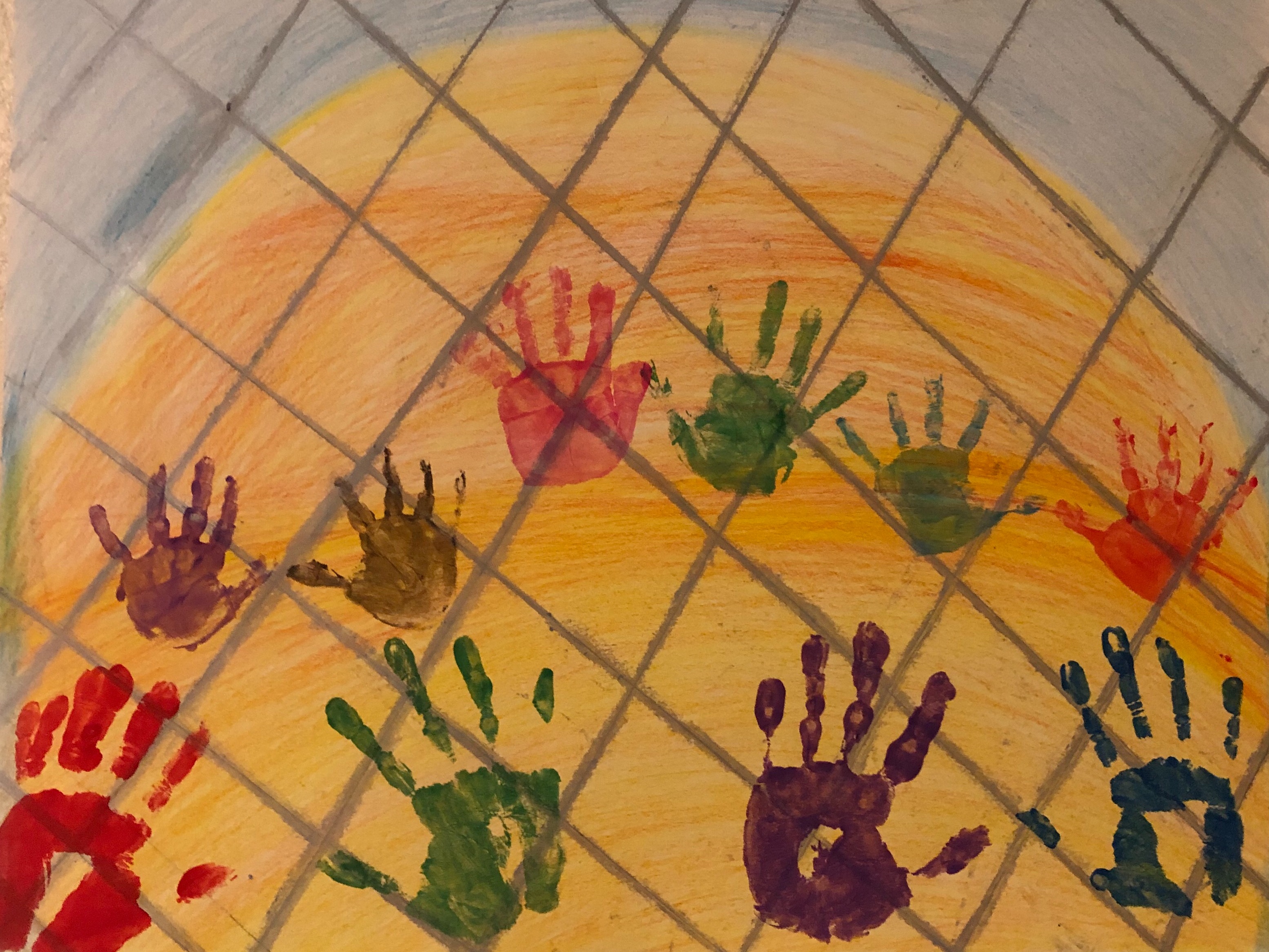 Painting/collage made w/crayon, fingerpaint, and color pencil depicting the hands of child detainees at the southern border.

This semester, we spoke at length about encampment and prolonged detention of migrants and refugees. Talks from Professor Hing and former U.S. asylum officer Doug Stephens in addition to the “This American Life” podcast gave us much more insight into the migrant situation at the southern U.S. border and the new ethical problems that MPP or the “Remain in Mexico” policy have brought about. We learned that many of the policies enacted by MPP have caused and created many refugee camps and shanty towns along the southern border in areas in Mexico that were otherwise desolate. Where in the past, asylum seekers would be able to wait for their asylum hearings in the United States, they were now forced to stay in Mexico until that date arrived. We spoke about the state of exception ethics being enacted on refugees from Latin America is shown when children are separated and rights are not explained clearly. State of exception means that the rights that are due to all migrants are being taken away in the guise of those people who break the law are therefore not protected by the law. There are human ethical rights that the government should adhere to and people should be protected by according to international refugee law and those ethics are not being met at the southern border. The policies in place are demonizing an entire category of refugees being held without proper care, or proper guidance, and not being given full access or having their legal options properly explained to them. Much of what we heard Dr. Hing and Doug Stephens say about their time at the border was disheartening. Doug Stephens spoke in our class and in the “This American Life” podcast that the policies were handed down almost overnight and with little explanation or training when MPP was enacted. Many of his cohort did not know what to do or what the proper procedures were and there was very little guidance. He and many of his coworkers found it extremely difficult and unethical to proceed with what he called “an illegal policy”. Dr. Hing was in an interrogation room where children were being spoken to without a translator nor a parent or an adult responsible for them, nor legal assistance. Much of the desert that the migrants are forced to cross due to the increased enforcing of standard border crossings since the 1990s in the Prevention through Deterrence policy, it is the desert heat and desolate area that kills much of the migrants attempting the journey north to the United States. This is what we learned as Bare Life ethics. The migrants who die are killed by the desert, not the policy according to the administration, and therefore the lives of the migrants are stripped of value. Dr. Hing spoke at length about children being kept in cells with other children and they are forced to comfort each other since their adult is not with them. Older kids take the younger kids under their care even if they do not know each other because they have nobody else to care for them. There is very little hygienic care and they all share crowded cells. The children that are locked up and detained are the focus of my artwork.

This painting/collage is made with color pencil, crayon, pastels, and fingerpaint on a large poster board. The top section has an azure sky blue surrounding a yellow and burnt orange sun which takes up most of the poster. The sky and sun were drawn with crayon and color pencil on white poster board. The sun was made with yellow and orange to depict a desert heat which many migrants at the southern border have to endure in their journey north. Surrounding the entire poster, layered on top of the sky and the sun, are gray lines patterned to cross each other in a hexagon-style intended to depict a metal fence surrounding the entire scenery. This shows that there is a blockage of passage. The metal fence was drawn with dark gray pastel on top of the other artwork. I chose pastel in lieu of marker or crayon because it would cover up anything drawn beneath it yet it would still blend in with the crayon and color pencil textures. After all of this was drawn, I used fingerpaint on hands to depict the children who are being denied passage and detained. There are five sets of hands in total, one in each color, so ten hands in different colors. Starting from the far bottom left of the art piece, the first hand is a right hand and the color is red, next to it is a left hand in green fingerpaint. Directly above those sets of hands, are two smaller sets of hands, the right hand being purple and the left is black. Next to those, are another set of hands, the right is pink and the left is green. Next to that set at the far top right, are two other sets, the right hand is light blue and the left hand is red. Below that set of hands is the final set of hands on the bottom right corner of the piece, the right hand is purple and the left and final hand is blue.

Special thanks to May Lam and her two beautiful children, Jasper and Lillian, for their assistance with the fingerpaint artwork on this project.