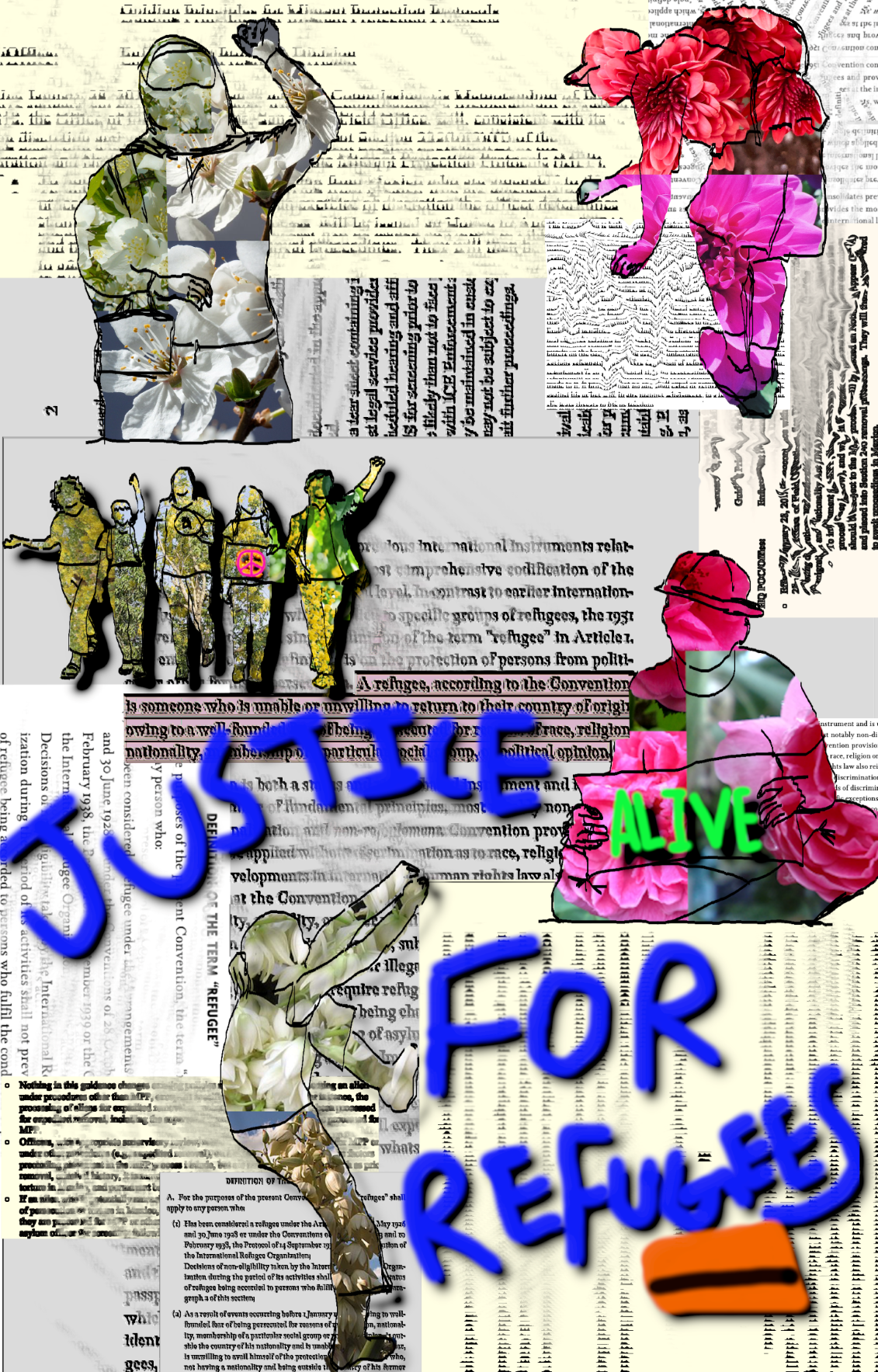 Digital art piece portraying refugees facing confinement by documents and legislation, as opposed to being seen as human beings.

This digital art piece pertains to the unjust protection gap created by refugee legislation like the 1951 Convention and MPP, which undermine the experiences embodied by refugees. Countries desire to fulfill their moral obligations of assisting less advantaged people, however their flawed texts contain strict requirements and unsafe detainment processes --ultimately failing to help the majority of asylum seekers in high-risk situations.

The piece shows the silhouette of refugees and refugee protests, sketched over with black pen. A collage of flowers fills each outline including Flor de Izote from El Salvador, Dahlias for Mexico, Padauk for Myanmar, and Jasmine for Syria. The backdrop is a collage of text from the 1951 convention and a Migrant Protection Protocol document, in hues of white, beige, and lavender. The text is distorted and smudged, the center highlights the definition of a refugee. In bright blue, the words “Justice for refugees” are spray painted, as well as the orange and black refugee flag. The purpose of the flowers was to represent refugees as people who grow and change throughout their life, in contrast to the legislative text which is sedimentary.

Considering the ethical concerns of the 1951 convention, this artistic piece demonstrates how refugee lives are transformed into politics. It seems like their whole circumstance of life is boxed into text, people forget that they are real bodies with real needs --not to be bound by a sedimentary text within laws.

The definition of a refugee adopted from the United Nations 1951 convention states that a refugee is someone who is unable to return to their own country due to “a well-founded fear of persecution based on race, religion, nationality, membership of a particular social or political group.” To begin, these five categories would be acceptable if they hadn’t left out the increasingly endangered climate refugees. In Rising Tides: Climate Refugees in the Twenty-First Century by John Wennersten and Denise Robbins, the consequences of climate change --including “sea rise, desertification, drought, unprecedented hurricanes, tsunamis, and war”-- will soon make it impossible for many countries to be habitable. This leaves thousands with no choice but to leave their homeland. Furthermore, the authors describe how in developing countries, “it is the impoverished who often bear the brunt of the most environmental damage, which in turn sets off migration events.” This results in the dire need of more privileged countries to offer asylum to climate refugees, and to exclude them from the definition of a refugee would leave entire nations of people extremely vulnerable. Thus, excluding climate refugees in the five categories of a refugee creates a gap in protection that could potentially trap millions in the detriments of their home country.

Furthermore, the creation of Migrant Protection Protocol in 2019 under the Trump administration devises supplementary life-threatening dangers for migrants. Ignoring their own non-refoulement policy in the 1951 convention, Remain in Mexico actively disregards the persecution and hazards of Mexico, as detailed by Doug Stephens, an ex-asylum officer. Asylum officers are told to discount independent evidence such as homicide rates and cartel violence in Mexico, on top of overtly specific requirements of proof of prosecution. Personal stories aren’t considered proof, and the refugees must use phrasing stating they express fear of being harmed because of one of the five refugee categories. MPP dictates refugees are removable, only assisting the very few refugees who have the resources to fit under the support of the law.

The legislation created by countries appears to have the intention to help refugees, which seems true; countries are offering asylum to applicants. Nonetheless, with their strict exclusions, countries attempt to fulfill their moral obligations without full commitment. Countries prioritize upholding their image as a Good Samaritan --a person or organization that is charitable and praised for helping the disadvantaged. Migrant “Protection” Protocol has endangered asylum seekers, yet the US falsely labels the law as protection. Having this savior complex allows the US and other countries to accept the credit of assisting others, drawing the focus away from thousands of refugees that are rejected or harmed because of protection gaps.